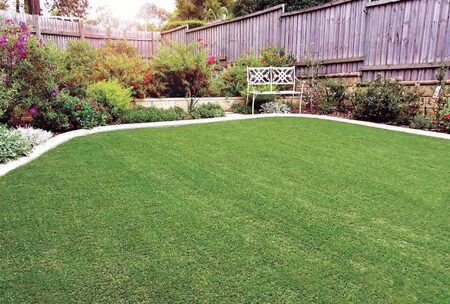 Artificial grass is a great low-cost and low-maintenance alternative to natural grass, it looks healthy all year round and avoids grass death, holes and the other issues that are common with natural grass. However, artificial grass quickly accumulates dirt and organic pollutants such as algae and lichen, owing to how much time it is exposed to the elements.

Cleaning artificial grass in this condition is essentially fruitless unless you employ a team of experienced professionals with the tools and methods required to provide the best possible results.

The most common issues that affect artificial grass surfaces include; algae growth, moss, lichen growth and general dirt accumulation. Algae growth is often the most noticeable, with green or red organic growths appearing on the surface and potentially the membrane of the artificial surface, if left untreated for a prolonged period, the surface can become hazardous with the algae forming a layer of algae that becomes very slippery when wet.

Moss also exhibits the same effect and both issues worsen over time, although the organic nature of these two problems mean that they can be treated in the same way. Both algae and moss growth are most common on artificial grass that is close to trees, plants and other fauna where the spores are carried in the wind, settling on the surface and growing in the wet conditions. 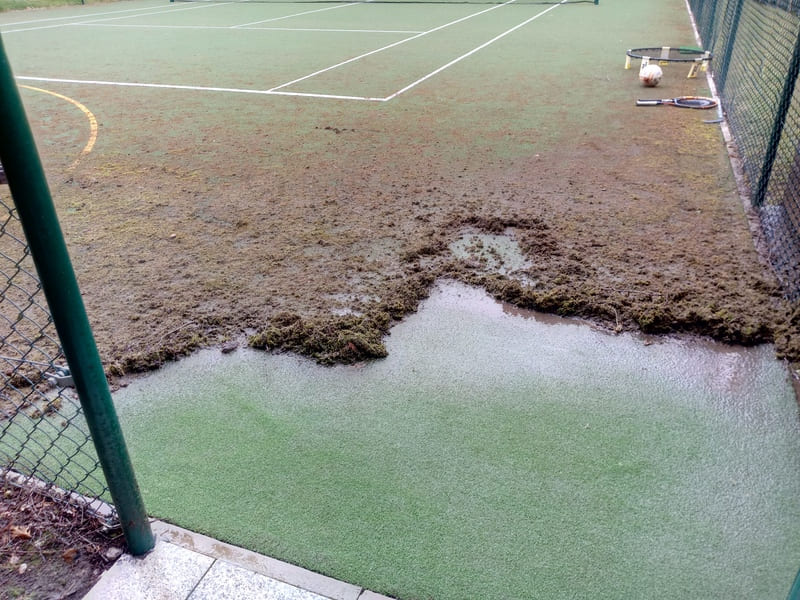 Surfaces that are infrequently used, such as artificial tennis courts in the winter, are also frequently afflicted with organic growths of this type, as the colony can develop undisturbed.

In our experience of cleaning artificial grass, the colour of the algae growth can indicate its maturity and potential methods of cleaning. Darker algae stains indicate a more developed growth, with green being juvenile and red requiring more treatments with biocides and power washes to effectively clean.

Lichen growth is separate because, whilst also an organic pollutant, being spread in the same way as algae and moss, its effects are different in nature.

Lichen colonies do not form in the same way as the other organic pollutants, instead of spreading across a wide area, lichen growth generally centralises in one specific area. It is characterised by brittle green or red growth on the sides of the grass blades themselves. Again, a red or black growth would indicate a more mature growth, requiring a more intensive cleaning, although lichen growth does not generally form on the top of the surface, and so does not pose a slipping hazard.

Unchecked lichen growth does however pose another issue that can permanently damage your artificial grass, that being the risk of discolouration. Long-term exposure to developed colonies frequently causes artificial grass to lose its colour, reducing the overall appeal of the surface, so it is imperative to resolve lichen growth as soon as possible.

Finally, general dirt and soot collection is the most common issue we encounter, and by far the easiest to resolve. This type of inorganic pollutant requires no special detergent treatment to resolve, simply requiring a thorough, but careful, power washing treatment to lift the dirt off the artificial surface and clear it away.

A good team will appreciate that a successful cleaning depends upon two items: the expertise of the team and the quality of the equipment they use. Our team’s wealth of experience allows us to tackle essentially any issues that may occur, we have dealt with a wide range of problems and have developed our methods over two decades to quickly and effectively mitigate issues.

Equipment is the second aspect of a successful job with the technical aspect requiring a broad range of versatile tools to meet the demands of any job. The equipment list would include mechanical brushes, power washers, effective biocides and a variety of other tools to conduct the best possible cleaning.

The methods we employ have been developed and have proven their effectiveness over two decades of artificial grass cleaning, a job usually follows a multi-step template; to clear the surface of the artificial grass we usually use a strong leaf blower and then, a mechanical brush to clear away heavy debris, such as leaves and twigs, this would be referred to as the “coarse cleaning” stage. By the end of this stage, we would have aimed to clear the surface of any such debris, ready for more fine cleaning.

Depending on the condition of the surface, we will adapt our approach, but we would usually apply a biocide to the entire surface, with a particular focus on problem areas. This would require a number of coats, but does guarantee the best results available, not risking discolouring your surface like a bleach would, but effectively destroying the root of the organic growth, greatly extending the life of your clean.

Following this successful application, we will then rinse the surface to clear away the biocide in a safe way and remove any additional dirt that may have accumulated.

Get Your Building Looking Like New, With Pressure Washing Services

We use cookies to ensure that we give you the best experience on our website. If you continue to use this site we will assume that you are happy with it.OkI disagree