Do you need free advice on Thatch Roof Maintenance or Cleaning Moss on a Thatched Roof?

Thatch Roof Maintenance and Cleaning Moss on a Thatched Roof

The durability of a thatched roof largely depends on how well it’s cared for. We have put together this guide about dealing with moss on a thatched roof. Preventive maintenance extends the roof’s lifespan, while immediate repairs ensure slight damages don’t worsen to ruin the roof. By employing a few inexpensive care practices, costly renovations can be avoided. Cleaning the roof every once in a while doesn’t cost much, yet it prevents damage that could result in the thatch requiring to be replaced. Corrective measures such as re-dressing loosened thatch helps prevents rainwater from seeping into the roof and causing the thatch to rot.

Storms, leaves, sticks, fir needles, birds and small animals can cause damage to a thatched roof. However, it’s moss, algae and fungi that pose the greatest threat. That’s why restricting their growth is taken to be the best way to help prolong the life of a thatched roof. In recent years, moss and algae control has become a popular maintenance practice to prevent damage to these kinds of roofs. Methods to eliminate moss on a thatched roof and algae have even been developed to ensure the roofs remain looking good, and remaining watertight. 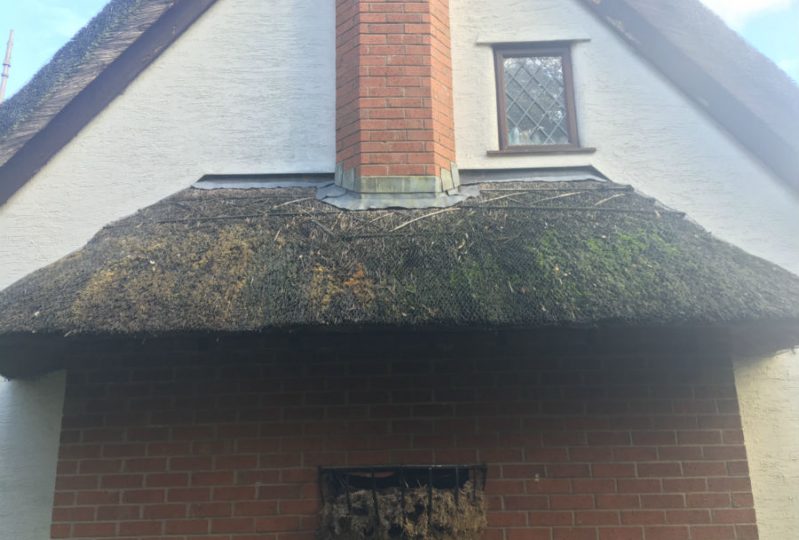 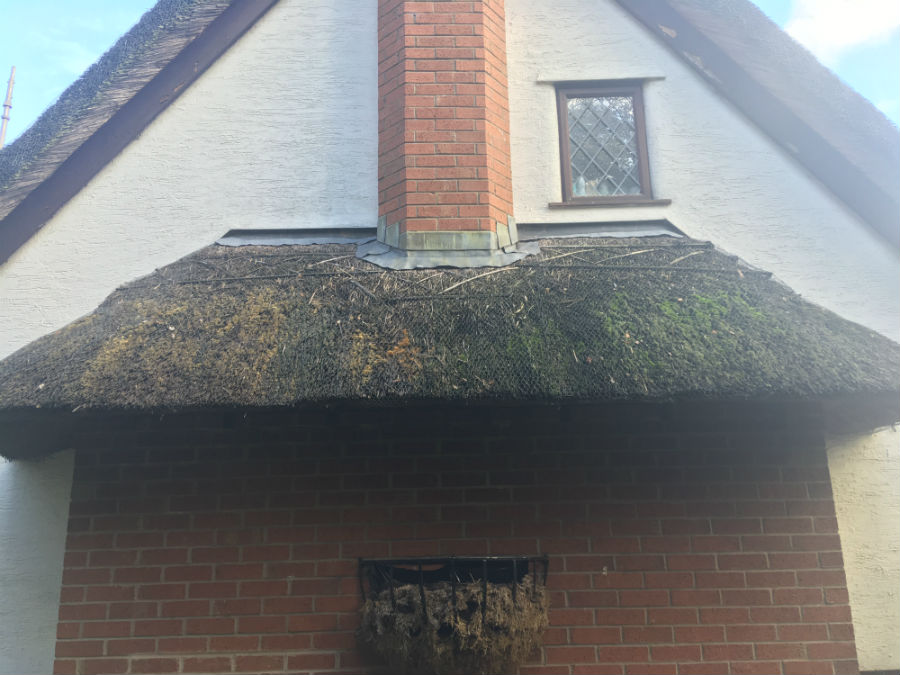 Frequent Cleaning
A thatched roof needs to be cleaned every once in a while. This serves to free it from debris and moss or algae that could cause it gradual and unnoticeable damage. The cleaning is done manually, with the help of a few tools and equipment. Using special types of takes, leaves, fir needles as well as moss are pulled off the roof. The process exposes it to wind and sunshine so that moisture takes little time to leave the thatch. As a result, fungi doesn’t find a conducive environment to grow which saves the thatch material from rotting.

Controlling the Growth of Trees and Bushes
Excessive growth of trees and bushes around a thatched roof is not advisable. The shade cast on the roof by the trees or bushes prevents it from drying up quickly enough. With no sunshine and wind to evaporate water off the thatch, the roof would mostly remain damp, especially during days when the weather is rainy. The leaves of trees also collect dew and drip dew onto the roof. It increases the moisture levels in the thatch which can cause damage within no time. The dampness provides ideal living conditions for fungi growth. The result is a roof that starts to slowly decompose. By pruning trees that shade a thatched roof, moisture dries quickly enough to prevent fungi from finding favourable conditions to grow. The roof lasts for longer, in addition to costing you less in renovations.

Re-dressing
Over time, thatch loses compactness and becomes exposed to the weather elements. Strong winds blow it about and rainwater easy finds its way into the layers. This can affect the roof’s durability if left unattended to. Restoring the compactness involves the use of a Leggett to align the thatch material without affecting its arrangement. By re-dressing a thatched room when it shows signs of becoming loose, damage by wind, animals, rain and other elements can be avoided. It improves the roof’s lifespan and saves you the costs of carrying out heavy repairs to over the years.

Controlling Moss on a thatched roof dealing with  Algae Growth
As an expert in thatched roofs will tell you, moss and algae can cause thatching material to deteriorate rapidly. The two grow on the roof’s surface to create a thin film that covers the thatch and prevents it from drying properly. The roof stays moist for longer, allowing for fungi to thrive. The result is a roof whose lifespan is reduced. It’s the reason why controlling the moss and algae growth on thatched roofs is essential if you want it to last. Also, if you don’t want to spend huge amounts of money carrying out repairs on the roof as a result of damage by a fungus growth.

Ways to Control Moss and Algae on a Thatched Roof
It mainly involves the use of an algaecide. The chemical is applied using a spray gun but under low pressure. When used the right way and at the right time, the chemical kills moss and algae. This, in turn, helps prevent the damp conditions caused by the film created by the growth of the two plants on the roof. As a result, fungi doesn’t grow on the roof. The thatch remains looking new for years, which relieves you of the expenses of costly repairs Controlling moss and algae growth on a thatched roof can add as many as 15 years to its lifespan by preventing the decomposition of thatching material. Using algaecides is also less costly compared to having to repair damage caused by fungi.

What are Algaecides?
They’re the chemicals used to kill off algae or prevent growth. The popular ones are the quats or quaternary ammonium compounds. The chemicals are available in various forms. Quats don’t stick to the roofs surfaces for long which means they need to be applied regularly. Because they’re easily washed away by rain, algaecides are best applied during the dry season.

Application of Algaecides
There are various ways to apply algaecides. They include spraying, immersion, injecting, brushing and impregnation. Spraying a thatched roof with an algaecide is better done during days when conditions are dry. Also when temperatures are not too low. The growth of moss and algae is highest during times when the weather is warm and. Much of the control agent will, therefore, be absorbed. As a result, the algaecide would stand a good chance of killing off the plants.

It’s advisable to keep the roof being sprayed with an algaecide moist for at least half an hour. This is especially essential during the summer when moisture dries off a surface much more quickly. Moss and algae require this length of time to fully absorb the chemical. If the thatch happens to dry earlier than this, it can mean reduced effectiveness of the algaecide. The chemical needs to be sprayed in the right amounts for it to work. It may not be possible to estimate the cost of spraying a particular area of thatch as prices of the chemical vary from manufacturer to manufacturer.

Effects of Algaecides
Quaternary chemicals are not as strong as those containing Diuron. They act by perforating the cell membranes of fungi, algae and moss, causing the plants to die. For that to occur, the plants must absorb adequate amounts of the chemical. The person spraying the control agent needs to ensure that by following the correct application procedure and chemical amounts. The method of application, therefore, matters a lot. Care should be taken such as ensuring enough of the algaecide is sprayed on the roof’s surface. The thatch should also be adequately moistened to allow for maximum absorption of the chemical.

Quats don’t present much risk to the environment or even the roof itself. They re almost harmless to vegetation, and will not affect the gardens around the house whose roof is being treated. However, ponds that are too close to the house would need to be covered. Quats are not safe for fish and could result in adverse effects. During application, sprayers should be thoroughly washed and rinsed. That’s because quats can become less effective if they happen to mix with detergents.

Effects of Algaecides on Humans
The chemical can be dangerous when in mist or foam state. It’s advisable to avoid inhaling it in a closed room as it can lead to serious complications. In low concentrations, the chemical can cause irritation to the skin and the mucosa. Symptoms include a dry throat, coughing and in some cases, nausea. Wearing protective clothing when applying an algaecide can greatly limit exposure and prevent these symptoms of poisoning. Following the right application procedures such as the right dosing also helps to ensure safety.

To Sum it Up