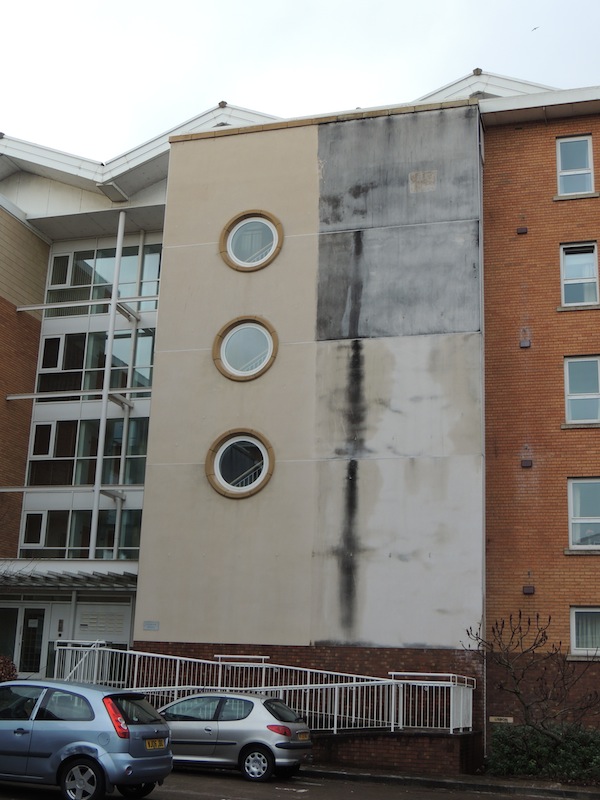 Building cleaning information …why your buiding gets dirty.

Building cleaning information. Nature relentlessly affects the built environment, at it’s pace, until most surfaces are eventually covered with a cocktail of bacteria, fungi, algae, yeasts, protozoa and other micro organisms along with non living debris and corrosion products. The layer is called a biofilm.

Different species have different needs and colonise the surface in relation to one another. At first we have rustic organisms requiring only CO2 from the air and sunlight as their carbon and energy source. Algae and antibacterial belong to this wave of early settlers. Once the surface is inhabited the cycle begins and species needing elements of organic matter can thrive. Fungi are quick to the mark : Spore reproduction is invasive.

Examples of the second stage are seen on painted and rendered walls in marine atmospheres where a green algae producing an organic red dye sometimes colonises the surface. The red dye is a UV filter. The opportunity of abundant organic supplies and shade attracts filamentous fungi, slowly digging their hypae into the surface porosity behind the red cones. The give away is a faint localised shade of grey when the red dye has washed away upon treatment.

Cleaning a biofilm should be attempted with the soft approach first. There are a few techniques to choose from.

Biocides : Modern days biocides are almost exclusively quaternary ammoniums. They are highly effective and degrade in contact with biomass. They exist in professional grade, like Algoclear Pro, or in general public grade with a concentration capped at approximately 10%. Some brands contain considerably less active ingredient and checking the concentration is the first step to a purchase. The biocide should ideally be of high purity to avoid possible interaction with glass proprietary coatings, felt plasticisers, silicone etc..

Oxidising agents are often mistaken for surface biocides. The most common oxidising agent is bleach. It interacts with the substrates it is applied to including ; clothing, lung tissues etc, and should be avoided for anything other than a localised area, and should never be sprayed. The harsh effects of bleach are easier to control when thickened into a gel.

High pressure water : The result is immediate but short lived : The organisms are spread around and still colonise the laps and interstices. A careful rotary jet cleaning followed by a light application of a biocide will be successful.

Steam : The technique requires professional equipment. It works well on grime generally and metabolites in particular. However, it does not shift algae and is often used in conjunction with a biocide.

On timber : The best way to protect timber from rot is to kill the fungi causing rot. This is done with a regular application of Algoclear or equivalent biocide. The practice will alleviate the need for oiling or staining, preserving the silver grey of exposed natural wood. On decking a biocide treatment is the only sustainable way to prevent slime.

Sandstone or York stone : Whilst grim and biofilms can be readily removed with a rotary jet, the encrusted black dots can not. The dark crust is harder than the stone. A robust treatment of Algoclear will kill the fungal agent excreting the crust. Patience and UV light will finish the job ( photolysis ). In a sunny area the crust will decay and crumble naturally in a few weeks. In shady areas, a stiff brushing also after a few weeks will remove the remaining incrustations.

Artificial grass : Maintaining artificial grass poses a specific problem to the applicator : The product works on contact only. There are several m2 of grass blade surface per m2 of pitch. Furthermore interstitial gaps are densely created at the interface with the filler. The treatment will require larger amounts of mix than for a hard surface. The mix can be weaker by an almost reciprocal amount without penalty since the concentration will increase again as the water evaporates.

White and yellow lichen : Found and treated mainly on roof tiles, lichen can densely colonise any cementitious surface. The treatment will kill the organism, but the adherence with a paving brick can take months to weaken down.

Porous surfaces such as concrete and render are naturally prone to biofilm colonisation : However they react particularly well to the treatment : On a dry day apply to saturation. The material will absorb the biocide and stay cleaner for longer.

Building cleaning information :In conclusion, a well chosen biocide and some basic understanding of a biofilm will go a long way towards maintaining clean external hard surfaces. It is the soft technique of choice for most surfaces. The latency sometimes observed for final results is well worthwhile.